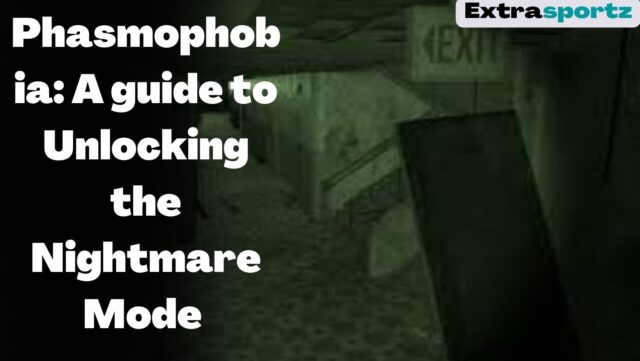 How To Unlock Nightmare Mode On Phasmophobia?

Phasmophobia is a 4 player online Psychological horror game. In this game, Players along with the team will have to enter the haunted location that is surrounded by paranormal activity. They have to collect as much evidence as possible. In this game, players have to work against many ghosts if they want to finally reach a level to unlock certain modes in the game. In this guide, we will let you know what players can do to unlock the Nightmare mode in the Phasmophobia game.

Phasmophobia: How to Unlock Nightmare Mode?

When you are on the task to complete the levels, you have to take into account other small objectives as they will get you rewards and extra money using which you can buy more items. You also have to avoid capturing much of the evidence about the ghosts. You can do this when you finally start playing Nightmare mode. In this mode, you will have to hustle a lot to capture the ghost because it is difficult to capture in the Phasmophobia game.

How to play the Nightmare mode?

As mentioned, Phasmophobia is a multiplayer game. You can play this game as a single-player if you are playing in some initial levels. However, As you move up the levels, you will face more difficulty in crossing the levels, this is when team efforts are required to cross the levels.

Hence, Nightmare mode is quite difficult to cross. You are advised to play this mode with the team. You and your team members can divide into different locations. All of you can gather evidence from different sources. Ghost present in this mode will go to one member. So, Players can start gathering evidence from different locations. This process will ensure that you will be able to cross Nightmare mode.

That’s all from us about how to unlock the Nightmare mode in Phasmophobia. I hope that you enjoyed reading this article as much as you enjoyed playing this game.

Frequently Asked Questions in the Phasmophobia

Is Phasmophobia a free game?

It is not a free-to-play game. The Phasmophobia price on Steam is $13.99. The one purchase allows users to play on a monitor or in VR.

What can I play Phasmophobia on?

Is Phasmophobia a heavy game?

To play the Phasmophobia, you need the RAM of 8 GB and Hard disk space is 13 GB.

Where can I get Phasmophobia?

Players can get this game on Steam.

What does Phasmophobia difficulty do?

Professional Difficulty is unlocked at Level 15 and will earn players 3x the cash rewards and 2x the experience gain.

What’s the easiest level of Phasmophobia?

Amateur is the easiest level of Phasmophobia.

How do I play Phasmophobia?

The objective of Phasmophobia is actually quite simple. Get in, find clues, and figure out what the ghost is!

How do you unlock pro in Phasmophobia?