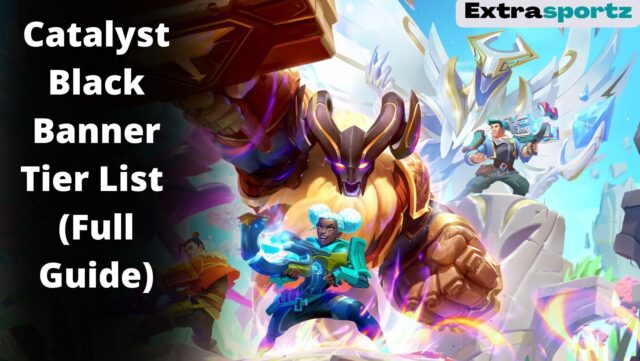 Catalyst Black is a shooter game that players find quite interesting to play. Players can play the Catalyst Black Banner on Andriod and iOS platforms. This android game was released in May 2022. It was published by the Super Evil Megacorp. In this game, players have to enter into a different realm. They have to make a real-time strategy to win the game. They have to battle the other players in order to win the game. Players can get many exciting items and chests in the game. There are 4 kinds of items that players can use such as Ability, Primary, Trinket, and Heavy. In this game, banners play to improve the capabilities of the items in the game. In this article, we have created a tier list of the Banners in the Catalyst Black game. Let’s get started:

There are 9 Banners all in Catalyst Black that come in different tier list:

Each of the banners has its own capabilities that are very useful in the Catalyst black game. Now, we will have detailed explanation of Tier List with their banners.

Assassin Banner comes in the Tier-S. We placed it there because It can blow damage to the enemies at a large range. Even if your enemy is in the radius of the 6-meter radius of enemies, it can finish them off. The damage you inflict upon the enemies depends upon the number of Assassin banners you have selected in the game. If you choose one Assassin Banner, then the damage will enhance by 8%. If you choose two assassin banners, your attack will increase by 24%. All in All, you can increase your damage by 40% which all depends upon the number of the banners you have chosen.

If you are a beginner in the game, then mark my words, Support banner is the best banner out there to choose. Why it is the best because it reduces the cooldown of your ability and you can attack your enemies faster rate. If you are familiar with the character, then it would be better for you to clear the bush. The reduced cool time will be determined by the number of banners you have chosen in the game. If you have only 1 support banner then it will give you 10 ability haste. The more banners you have chosen and the lesser is your cooldown time.

Vanguard Banner is also one of the best banners in the catalyst black. This is the reason we have put it on this list. This banner has the power to absorb the HP from the enemies if they take the damage from you. This banner comes with great ability and power. If you have selected one Vanguard Banner, you can get 14 HP with each Hit. Your HP will keep increasing depending upon the number of banners you have chosen in the game.

As its name suggests, The protector banner protects the players. This is the reason we have put it on Tier A list. This Banner increases the health of the players when they are playing the game. This way, players can sustain the game for more time. However, the amount of health will increase will depend on the number of banners you have chosen in the game. if you choose one protector banner, then your health will increase by 10%. This health in-game will keep enhancing depending upon the number of banners you have selected.

Primal Hunter Banner is one of the best banners out there in the game. What it does is that it can deal huge damage to the enemies who are in the primal form in the game. Therefore, it does not matter how your opponent is performing But if you choose this banner, It will spoil the whole performance of that player. Again, The amount of damage it will deal will depend upon the number of Primal Banner you have chosen in the game. If you choose one Primal Hunter Banner, then it will increase the attack on the enemies with the Primal form by 25%. Players can deal up to 125% damage to the Primal enemies in the game.

Sniper Banner is placed in this Tier B because it is not used much. This banner can deal damage to the enemies who are within a radius of the 9 meters. The more banner you select, the more damage you can inflict.

Primilist Banner is not as effective as other banners in the mentioned tier lists. Using this banner will reduce the cooldown time of your ability that will transform into the Primal Form, Primal Attack and Primal Power. If you use one banner, then you will get 8 Primal haste, 5 Primal attack and Power Haste.

The seeker Banner is not as good as other banners. However, it can prove to be very useful at the right time. If you use this banner, you can get the Free Primal Charge and heavy Ammo.

This was a huge tier list of the banners. I hope that you got the idea as to how you have to use them in the game and what they can do for you in the game if you select the banners in the tier lists. That’s all from us about the Catalyst Black Banner Tier List (June 2022).

When the Catalyst Black was launched?

Is Catalyst Black a good game to play?

Catalyst is a great game to play as it offers you great control over the game. The buttons in the game are fast and there is an auto-aim facility also available.

Can you play Catalyst Black on PC?

Yes, Well Catalyst Black is a PC game. But you can play this game on PC using the Emulator.

How many GB is Catalyst black?

Catalyst Black occupies around 1 GB of space in your mobile.

Is Catalyst Black pay to win?