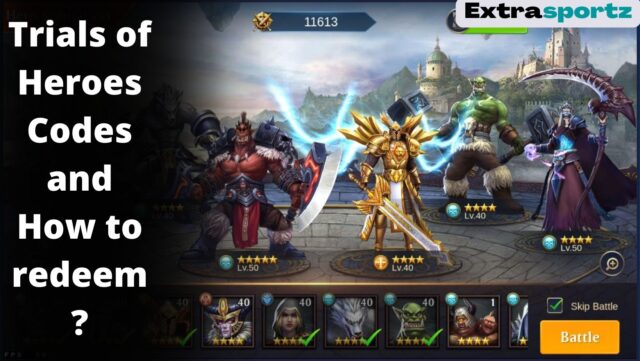 Trials of Heroes Codes 2022 (September List) and How to redeem?

The Trials of Heroes is a role-playing game that was created and published by Jupiter Entertainment. Players can play this game on the android and iOS Platforms. In this game. Players get to witness epic battles to save the future of multiple races. If you are someone who loves action gaming then this is the game for you.

In the Trials of Heroes, you can redeem codes for free to get the free and exciting rewards. Players can get the rewards such as crystals, coins, and rare summon scrolls. In this article, we will discuss the codes and how to redeem them.

MAYDAYTOH – Use this Redeem code for 500 Crystals and 1 5-Star Elite Hero. (New)

How to Redeem Codes in The Trials of Heroes?

How to get more codes in Trials of Heroes?

The brand new mobile game Trials of Heroes is an action-packed fantasy RPG with massive hero summon and epic idle style gameplay. You will be gaming with over 1 million players around the world for glory in the championship arena.

Frequently asked questions in the Trials of Heroes

Can I use the Trials of Heroes codes anytime?

Players can not redeem them anytime. But they are meant to be redeemed in a certain time. After that, they tend to expire soon. The same is the case with Trials of Heroes. Players have the option to activate a code once in a lifetime on an account. However, players can redeem the gift codes anytime. But you must go through the terms and conditions of redeem codes of The Trials of Heroes.

Can I use The Trials of Heroes codes after consuming their rewards?

The Trials of Heroes has token-based codes. Once players redeem the codes, they don’t have the option to use it again, not even from any other user account.

How to activate The Trials of Heroes Codes?

To enter codes, you must go to The Trials of Heroes redeem code page. Look for the popup and enter the code in it, and press the “Redeem” button.

What is the benefit of using The Trials of Heroes redeem codes?